Halloween is right around the corner and it is perfect for a themed movie night. The perfect party includes fun food and spooky movies.  Here are ten movies to choose from and check out this link to five tasty Halloween Dinner & Dessert Ideas.

In this classic movie, 3 scientists, who have been kicked out of their university, decide to go into business for themselves, by trapping and removing ghosts from haunted houses, apartments, and places of business.  Soon business is booming, but a skyscraper is taken over by a powerful ancient god which might prove the Ghostbusters’ end!

This is a story about a group of friends who are trying to save their homes from being demolished and made into a golf course by raising enough money to stop the development.  When the groups’ leader finds a treasure map, they try to find the treasure before a crime ridden family takes it first.

When Billy is given a mysterious pet by his father, he is excited.  But the pet comes with 3 rules: never get him wet, keep him away from bright light, and never feed him after midnight.  When an accident occurs and the creature accidentally gets wet, Billy gets more than he bargained for.  Can he handle it?

3 sisters are killed by a small town for being witches.  But they cast a spell before their demise that would allow them to come back to life.  300 years have passed since then, when the new kid, Max, accidentally brings them back to life.  The sisters now have only one night to make it permanent unless Max and a 300 year old cat can prevent it.

DJ has suspicions about the house across the street because he frequently sees toys that land in the yard disappear.  When the old man has a heart attack and is taken to the hospital the day before Halloween, DJ thinks the danger is gone.  Then his ball bounces into the yard, and when he goes to retrieve it, the house comes to life and tries to get him!  DJ discovers that the house has a mind of its own and plans on eating all kids that come trick or treating there unless DJ can stop it!

The Nightmare Before Christmas

Jack Skellington is the pumpkin king in Halloween Town who is very tired of doing the same thing for Halloween every year.  One day he stumbles into Christmas Town and becomes determined to get the citizens of his town to put on Christmas…but, it doesn’t quite work as well as he planned.

Charlie Brown is so excited because he gets invited to his very first party.  The peanuts gang decide to go trick or treating before the party, but Linus is convinced that the Great Pumpkin will come visit his pumpkin patch and deliver presents.  Watch what happens to the whole gang in this great adventure.

Frankenweenie
Young Victor conducts a science experiment to bring his beloved dog Sparky back to life, only to face unintended, sometimes monstrous, consequences.

Hotel Transylvania
Dracula, who operates a high-end resort away from the human world, goes into overprotective mode when a boy discovers the resort and falls for the count’s teen-aged daughter.

ParaNorman
A misunderstood boy takes on ghosts, zombies and grown-ups to save his town from a centuries-old curse. 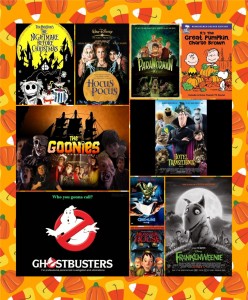