There is really only one place toddlers belong at 10:00 pm:  their bed, their parents’ bed, their grandparents’ bed, their siblings’ bed, pretty much any bed is exactly where a toddler should be at 10:00 at night.  There are a lot more places toddlers should not be: a movie, a restaurant, a bar, a rock show, on the stage at said rock show.  You would think parents would realize this, but nope, there are parents that have no idea.

These parents posted an explanation of why they felt entitled to allow their two-year-old on the stage at a rock show. The parents seemed to believe that because they drove 73 miles and paid $102 for their tickets they were entitled to let the child stand on the stage.  The mother seems to be the only one mentioning breastfeeding. Add this to the list of things you shouldn’t do near the stage, at a rock show. 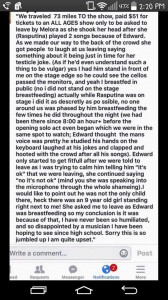 The opening act of the show actually posted a post on Facebook about this incident in support of the band, Rasputina.  As someone who was there, I tend to believe his story in conjunction with the band’s story. 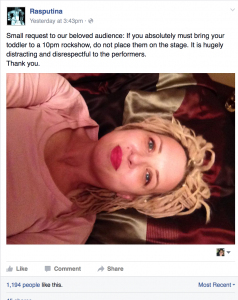 There are still a whole lot of people who seem to think that it was ok for these parents to bring a toddler to a rock show. Honestly, why would any parent want their child in a place where there is extremely loud music, alcohol, and there are probably a lot of people who don’t want to censor their actions because a child is around.  If these parents were so intent on seeing this show why did they not get a sitter? Even if these people wanted to bring their child to a rock show at 10:00 pm, they were called out because the people who do belong on the stage don’t want a child on the stage for about a million different reasons.

This comment pretty much sums up the entire ordeal: I don’t care if you’re breastfeeding 3 starving orphans, a endangered Siberian tiger cub or a baby panda. You have NO RIGHT to put your kid on the stage at a concert!

There is a level of common sense missing here. Yes, it was an all-ages concert, however they probably didn’t imagine that anyone would think a rock show at 10:00 pm was appropriate for a toddler.