My daughter and I began planning this party before we even left the theater after seeing the movie “Frozen” for the first time.  Is there anything more magical to a 7-year-old than a princess with the power to build her own ice castle with just a wave of her hand?  Luckily, my daughter’s birthday is in December, so we had some leftover costumes from Halloween.  And since every other girl in America dressed as Anna or Elsa for Halloween, I suggested in the invitation that guests dress up as their favorite Frozen character for the party. I’ve never seen so many princesses in my life… the little girl in me was jumping up and down with excitement! 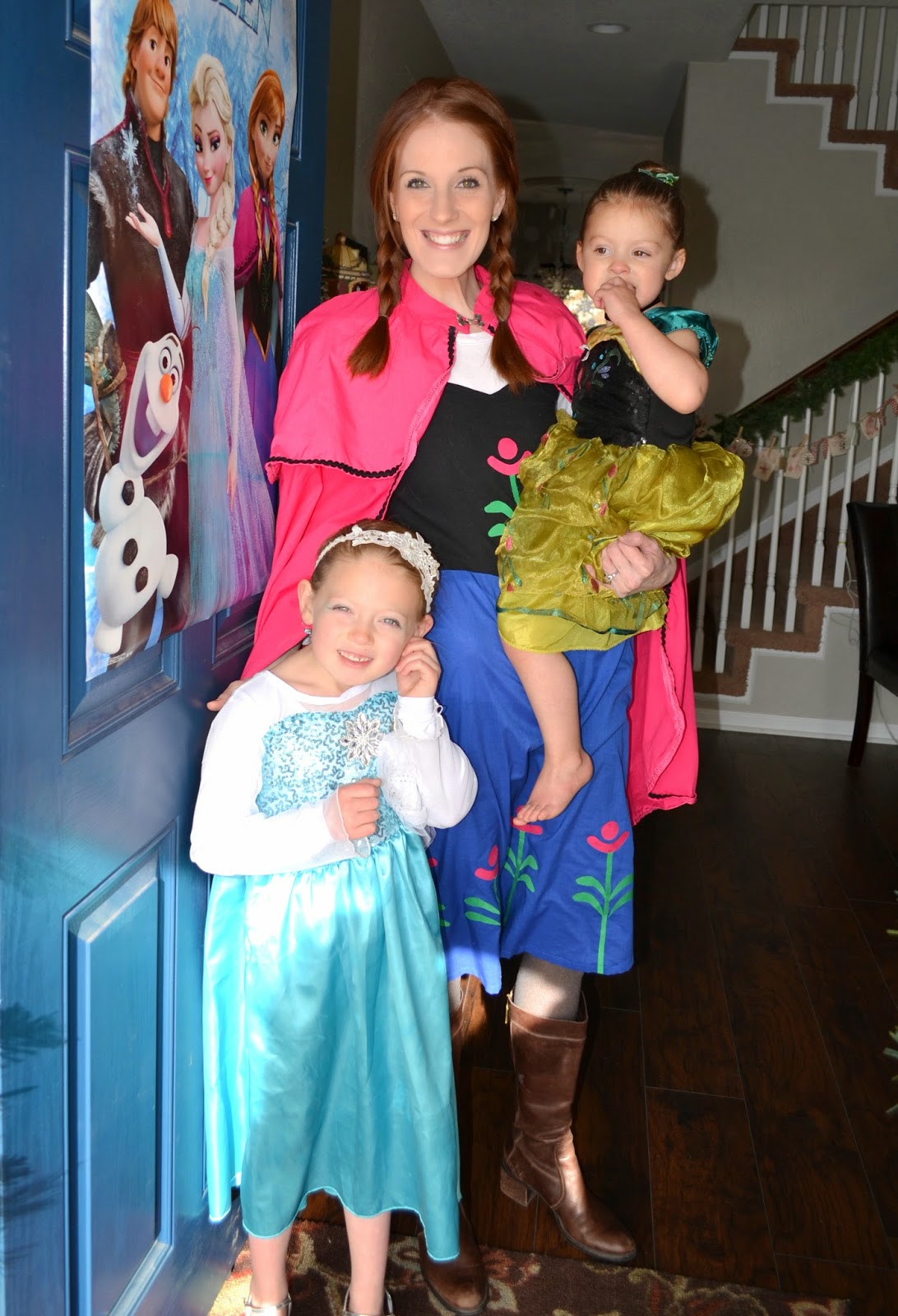 My daughter and I had such a fun time putting together a variety of wintry treats.  For “Kristoff’s Ice,” we just followed the recipe on the box for Berry Blue Jello Jigglers, and cut them to look like ice blocks. 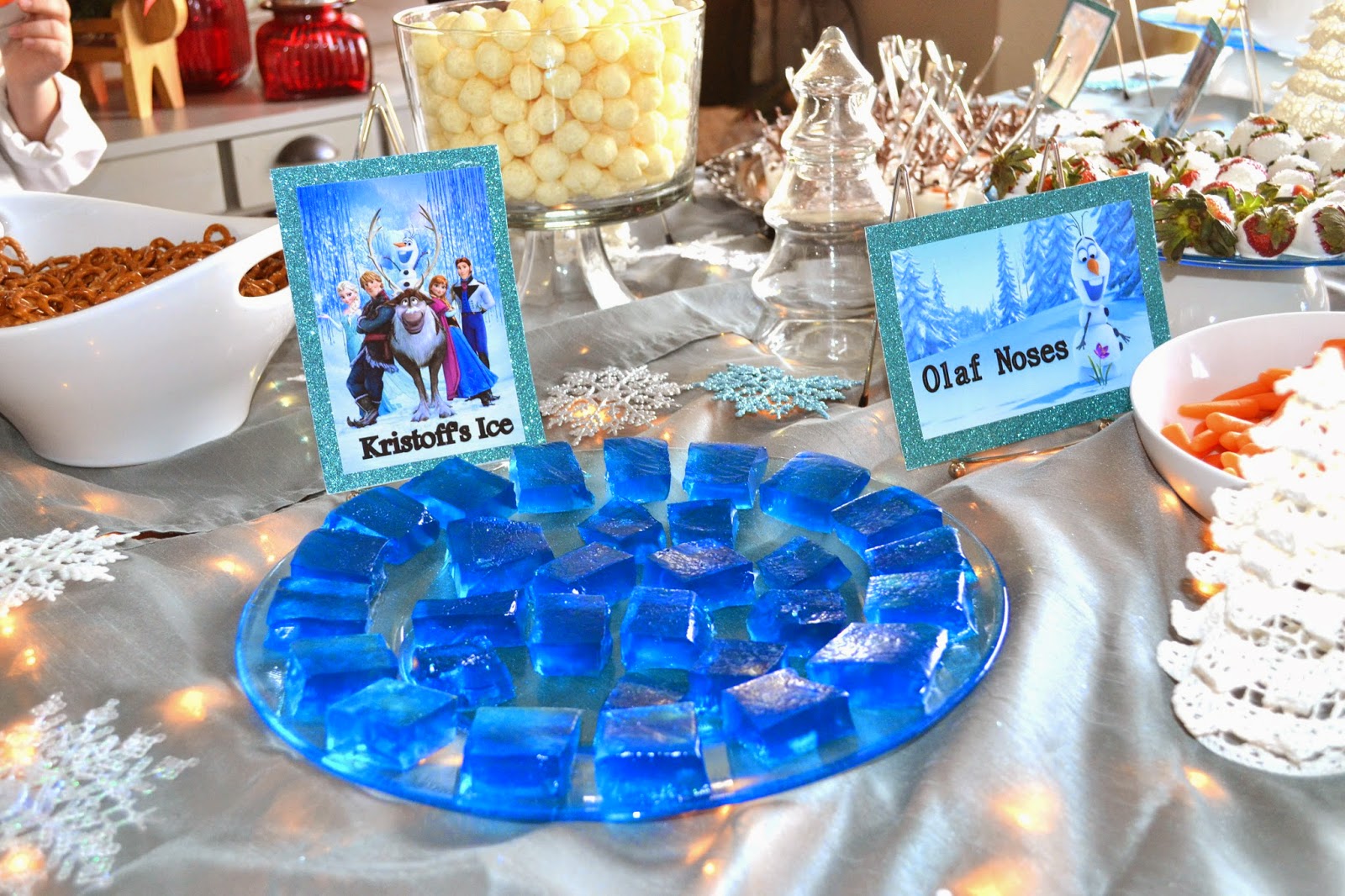 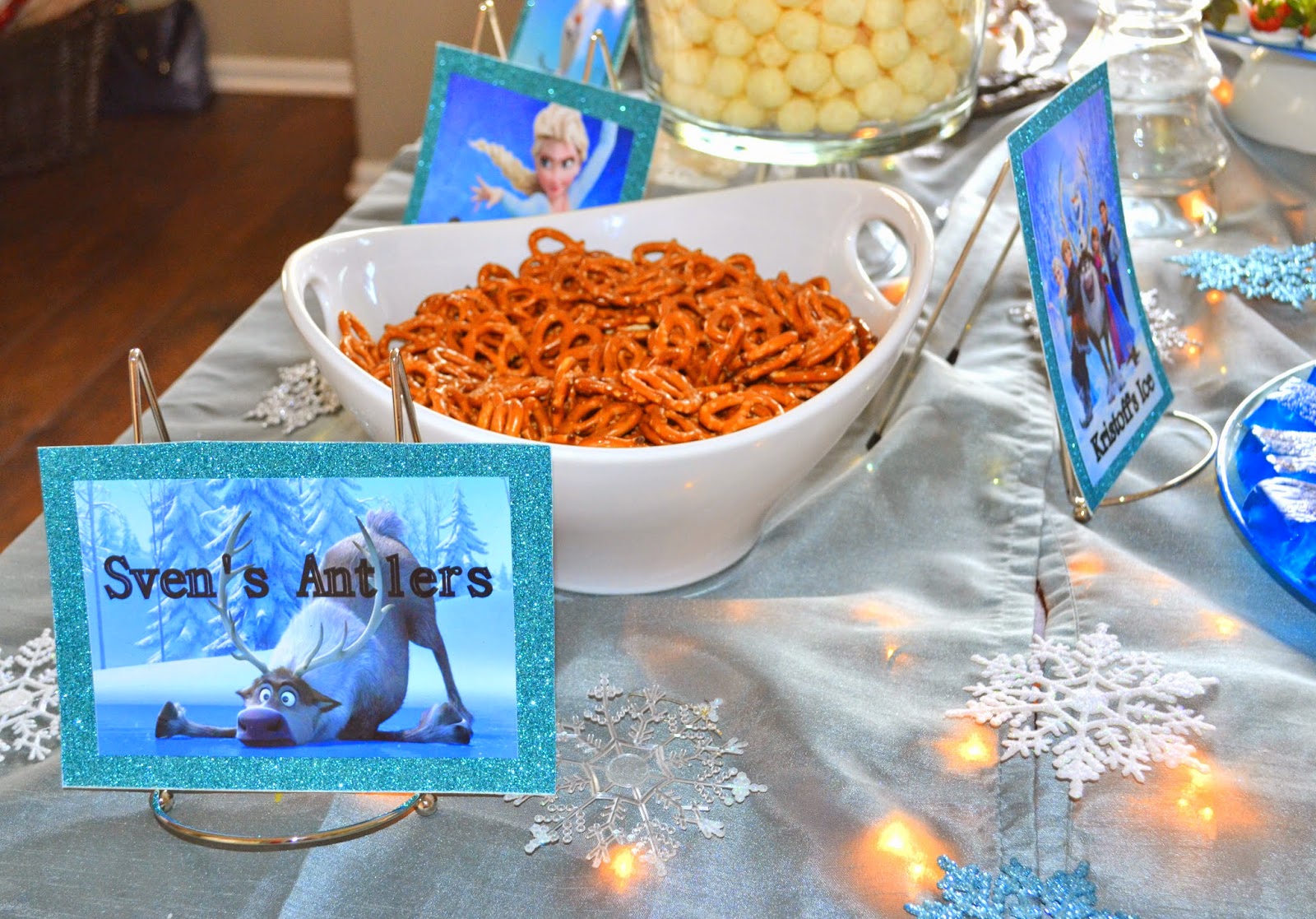 These “Snowballs” are simply white cheddar cheese balls.  If you can’t find the white cheese balls- marshmallows would be a great substitution. 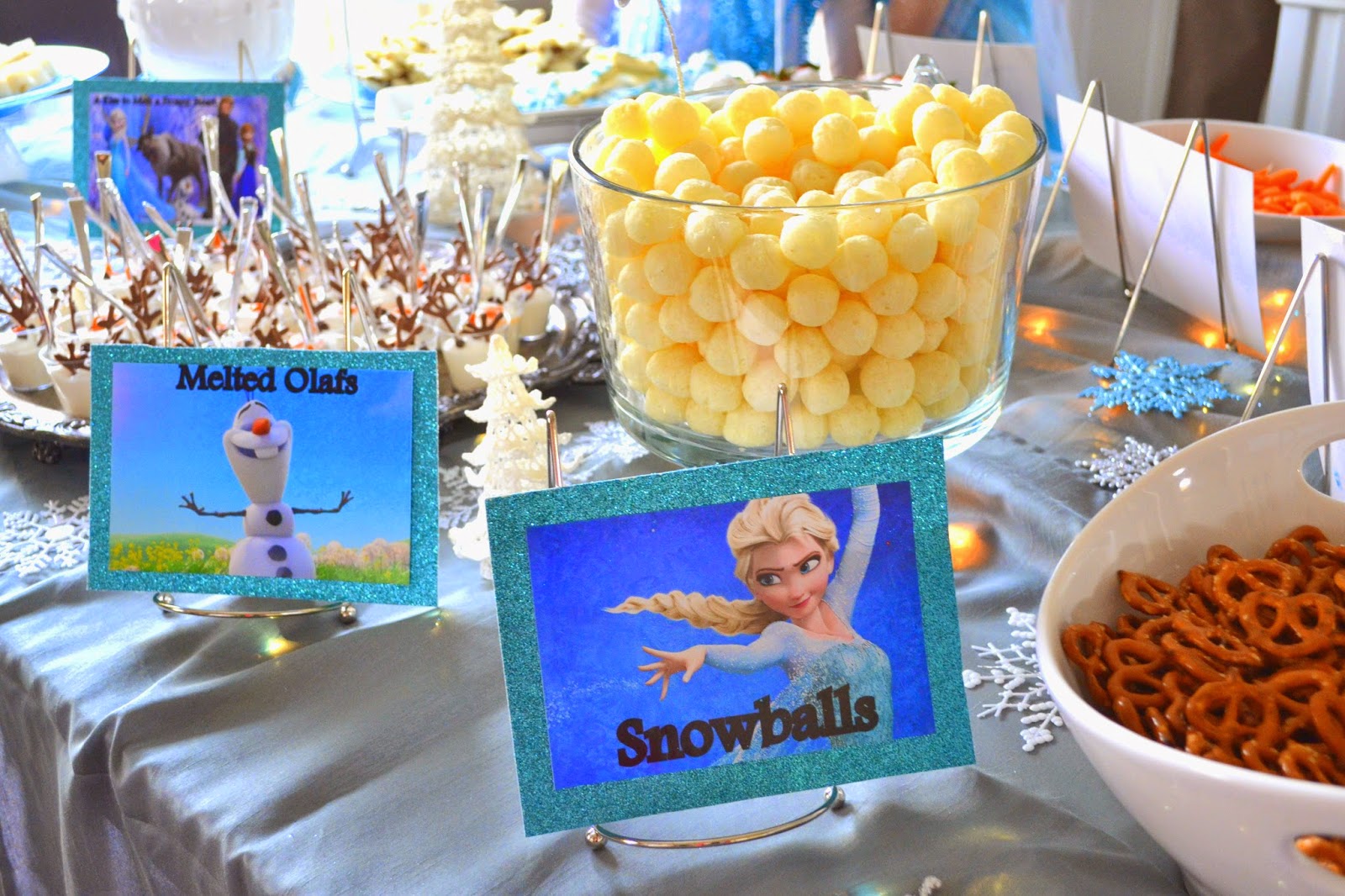 For the “Troll Roll-Ups” I made of a mixture of cream cheese, shredded cheddar, chopped black olives, onion powder, and salt to taste.  I spread the mixture on tortillas and rolled, then sliced. 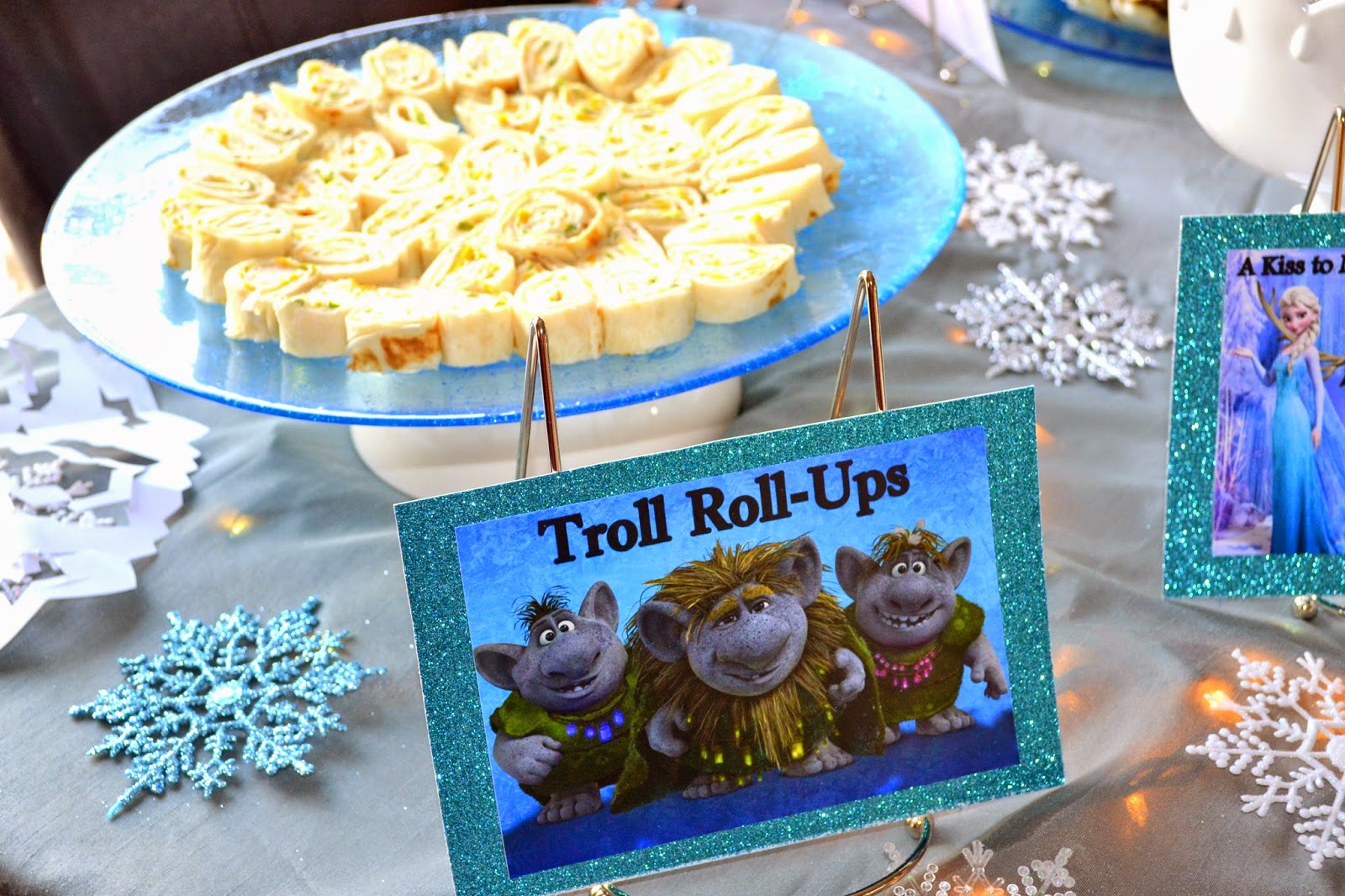 The coconut and original flavored Hershey Kisses are wrapped in blue and silver foil, and add a frosty element to the icy tablescape. 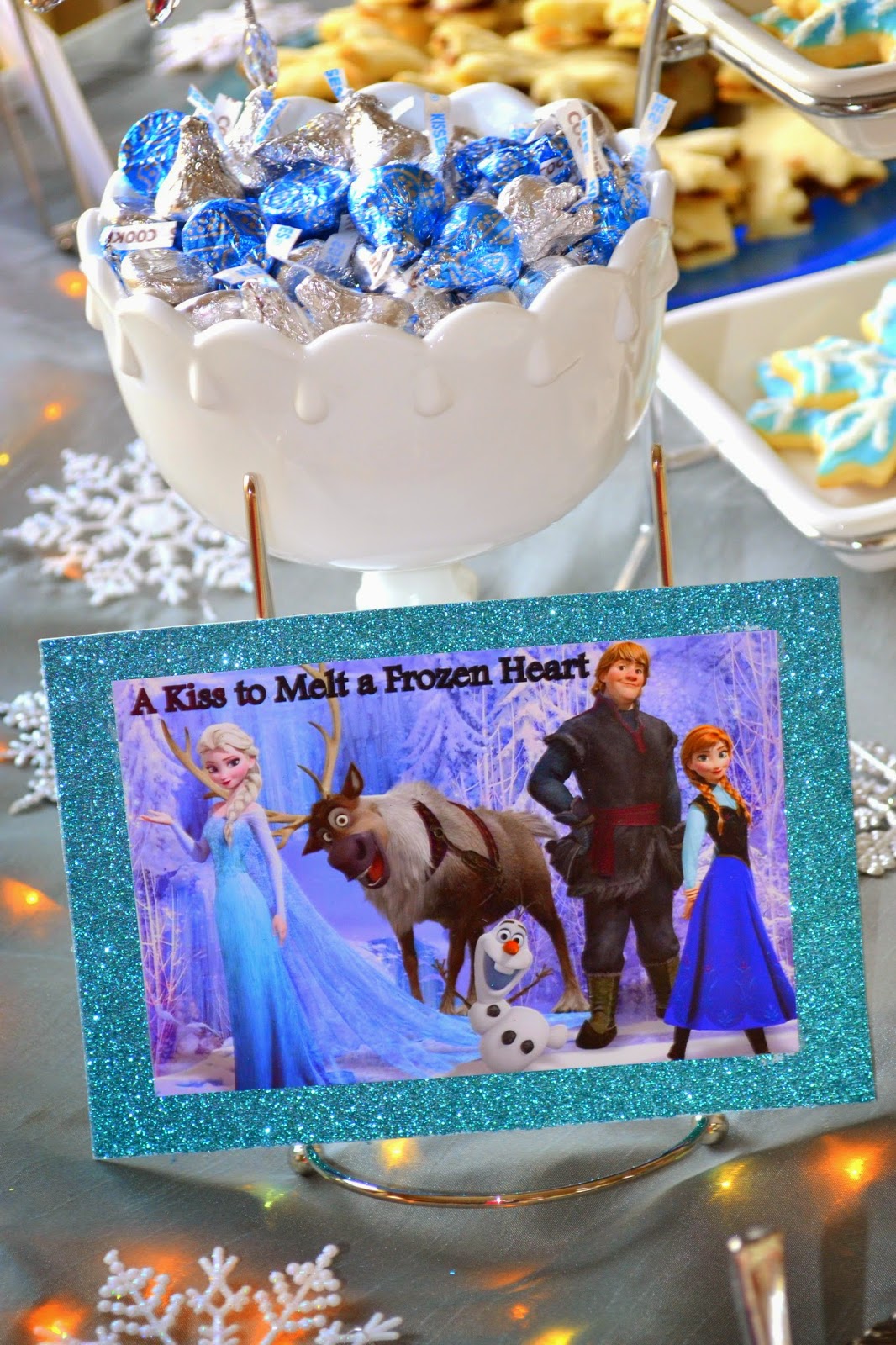 For the sugar cookies, I followed this recipe from Brown Eyed Rose.  I cut out the cookies with a snowflake shaped cutter and then iced the cookies with blue and white melting chocolates.  The chocolate does a beautiful job of keeping the cookies soft, and of course, it tastes delicious. 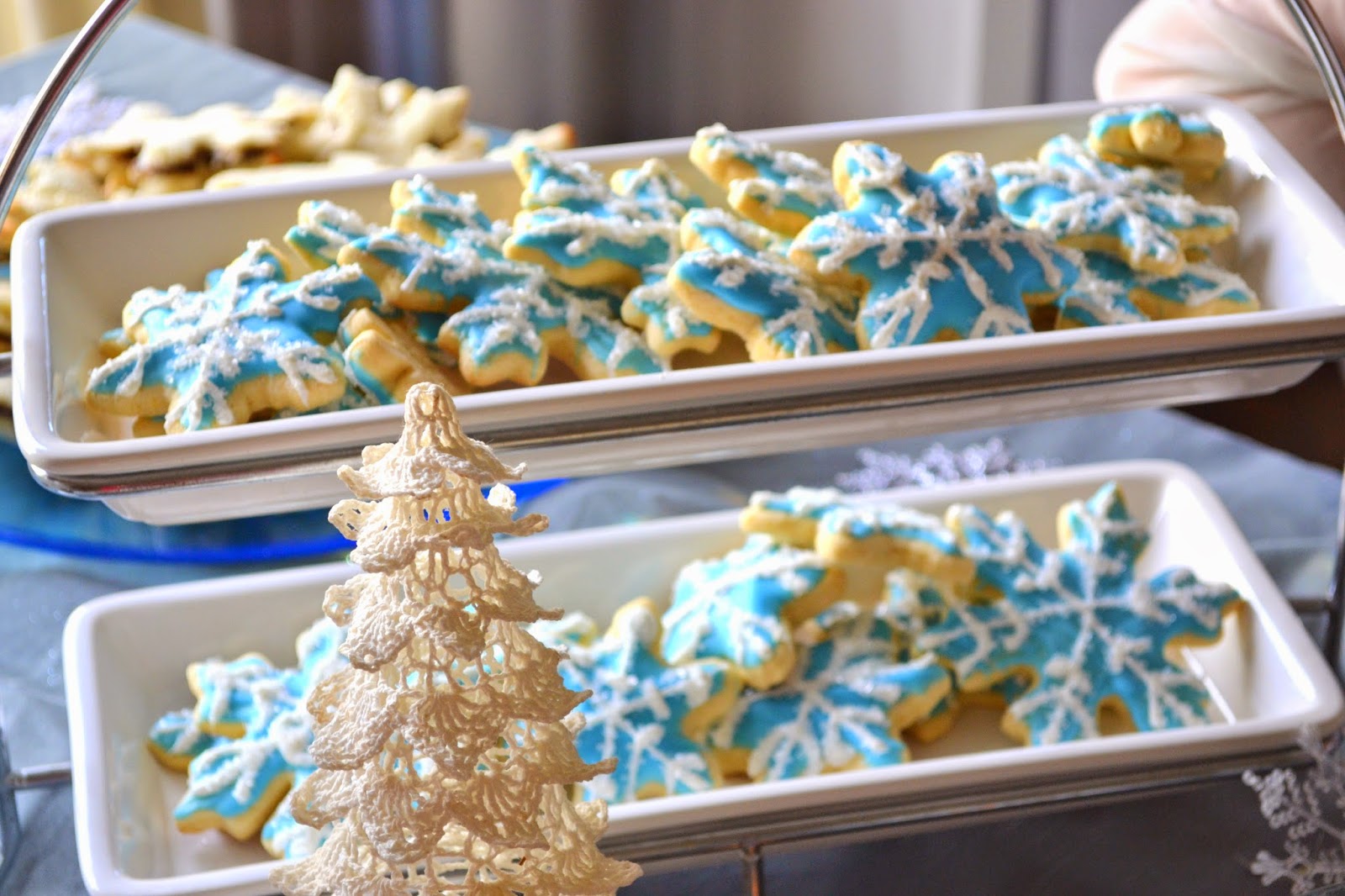 These are Nutella and Peanut Butter and Jelly Snowflake sandwiches.  Yummy! 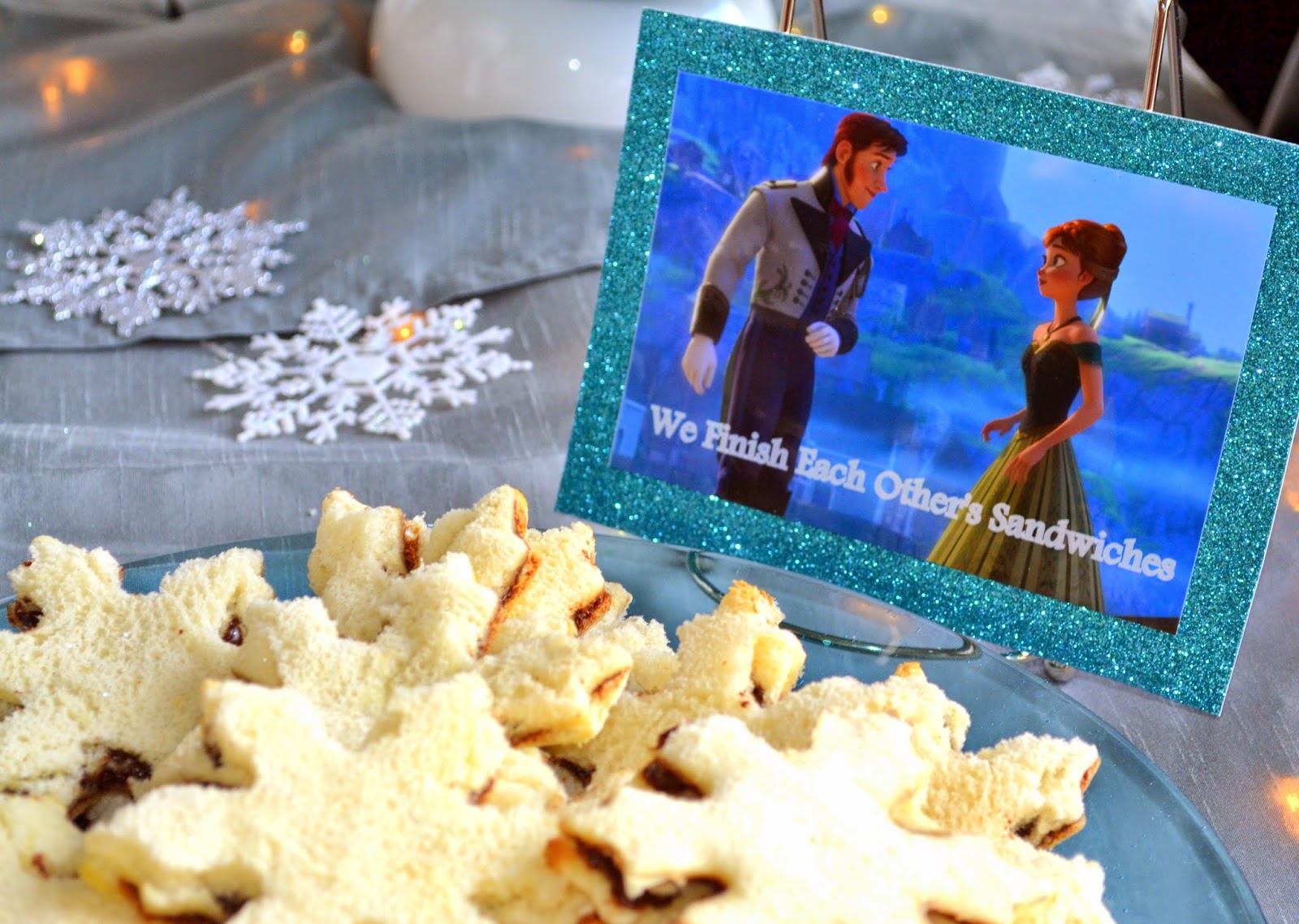 For the “Frozen Hearts,” I simply dipped strawberries in white dipping chocolate and then sprinkled with white crystal sugar. 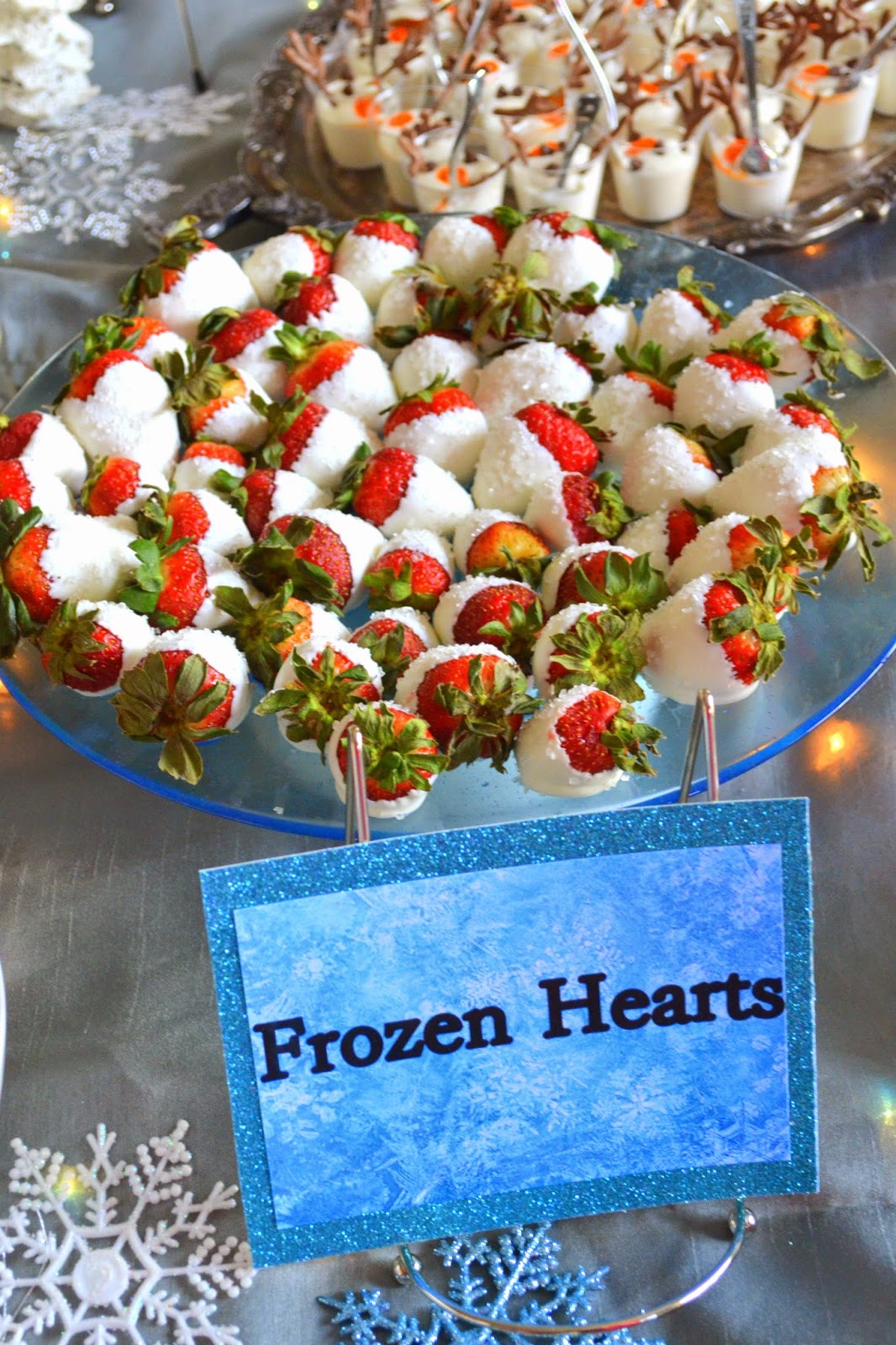 I love the simplicity of baby carrots for “Olaf Noses.” 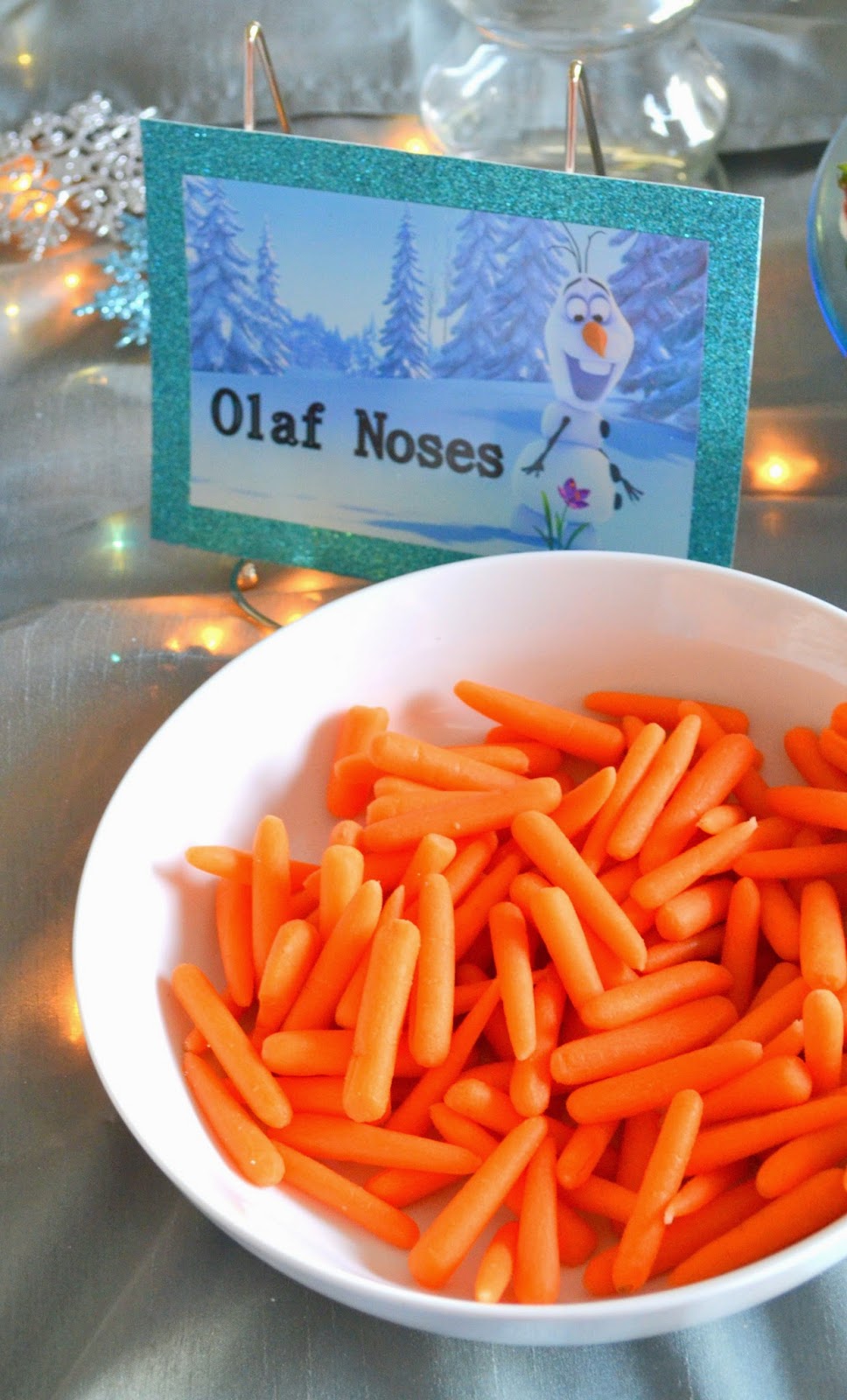 For the “Melted Olaf’s” I used vanilla yogurt, mini chocolate chips, and one orange jelly bean.  For the arms, I piped melted chocolate onto wax paper in the shape of twiggy arms. 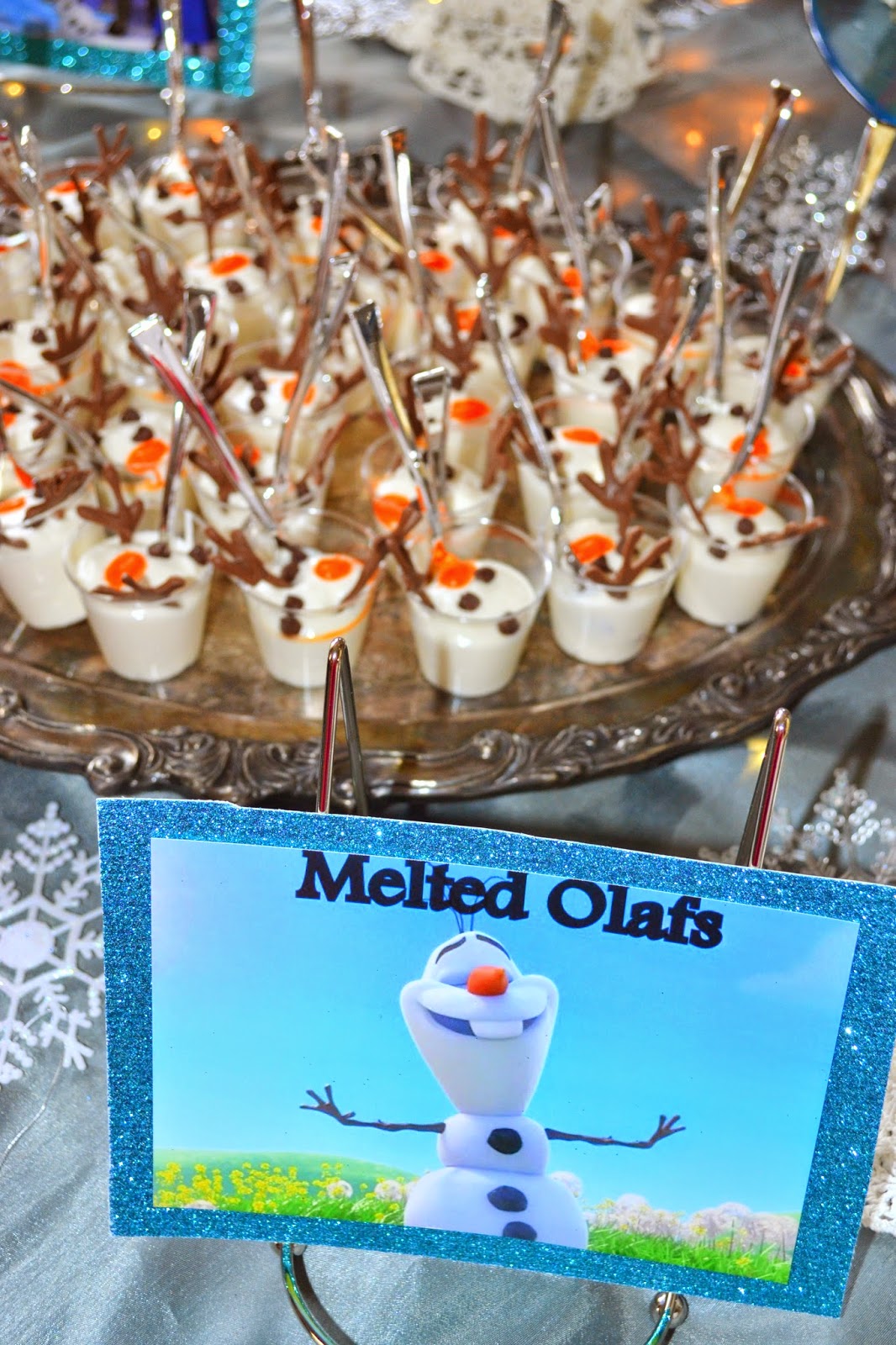 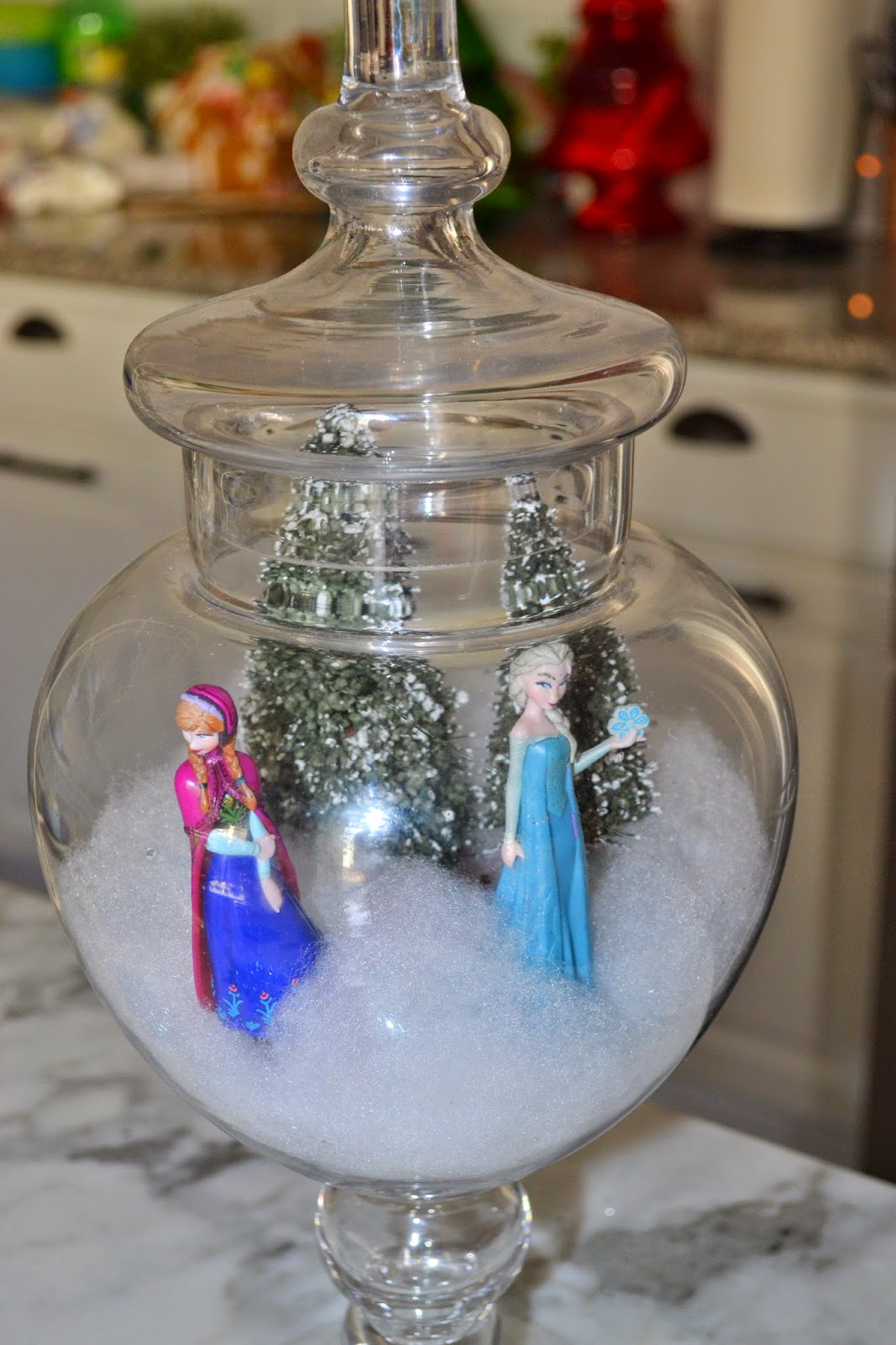 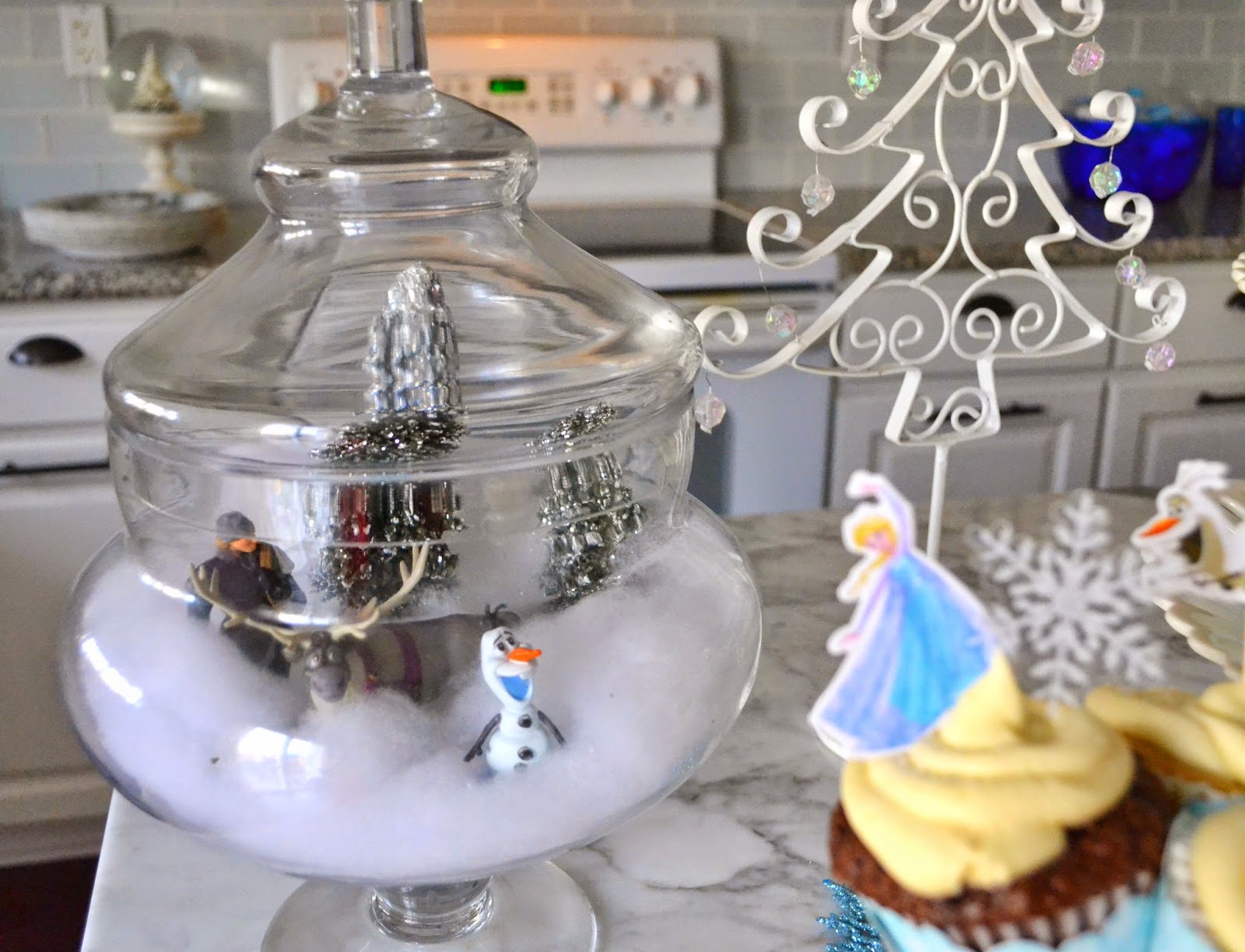 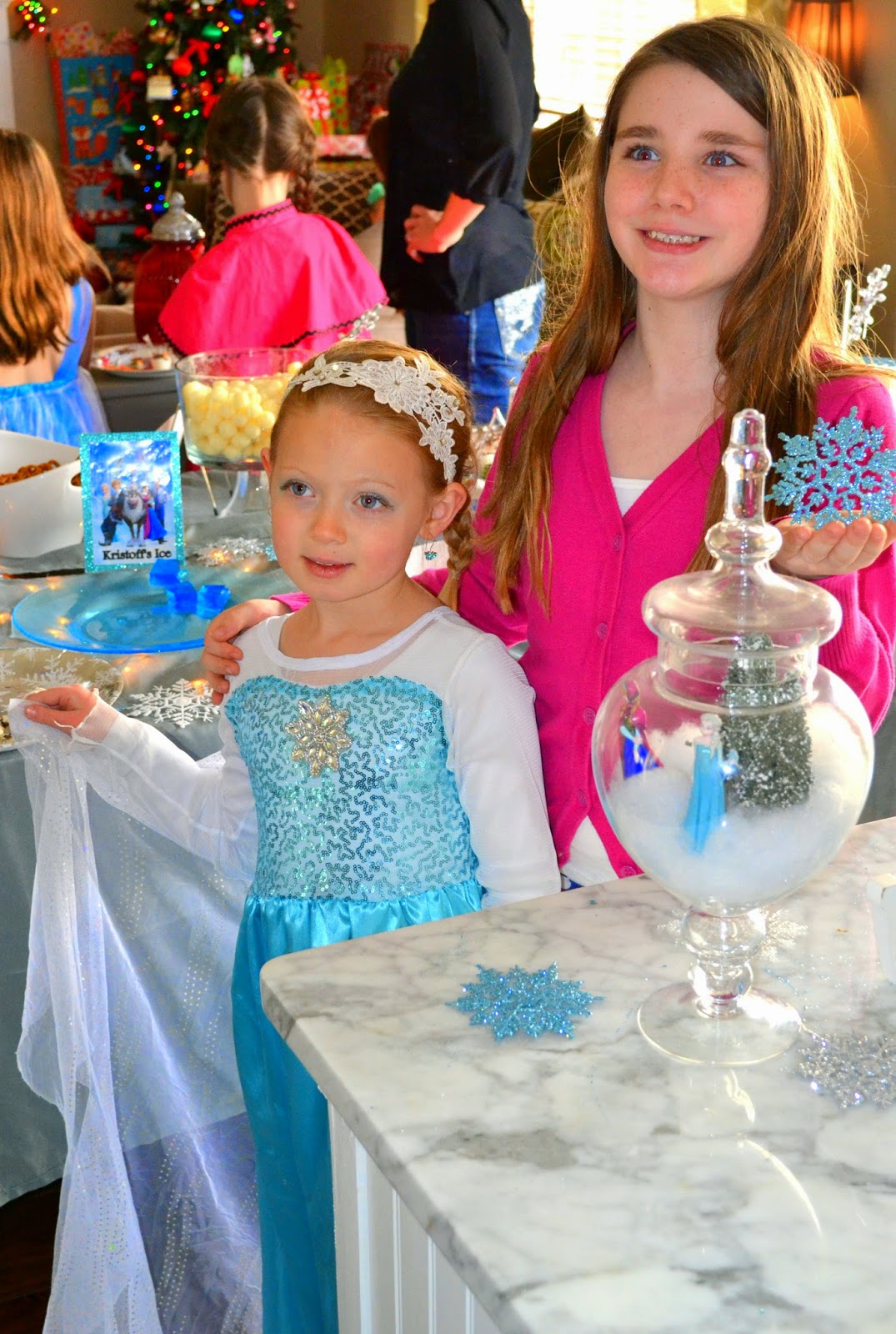 Even “Sven” made an appearance! 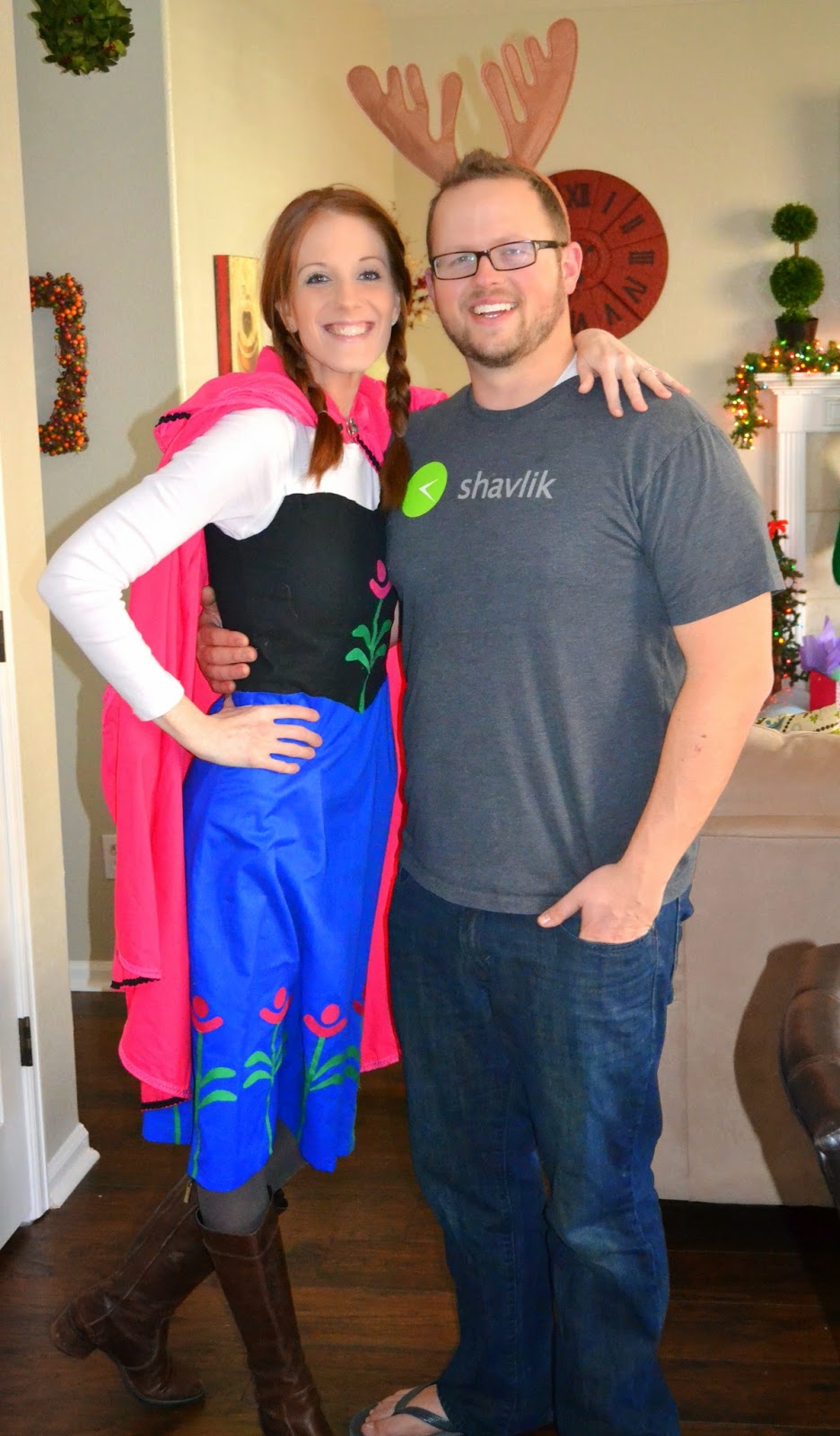 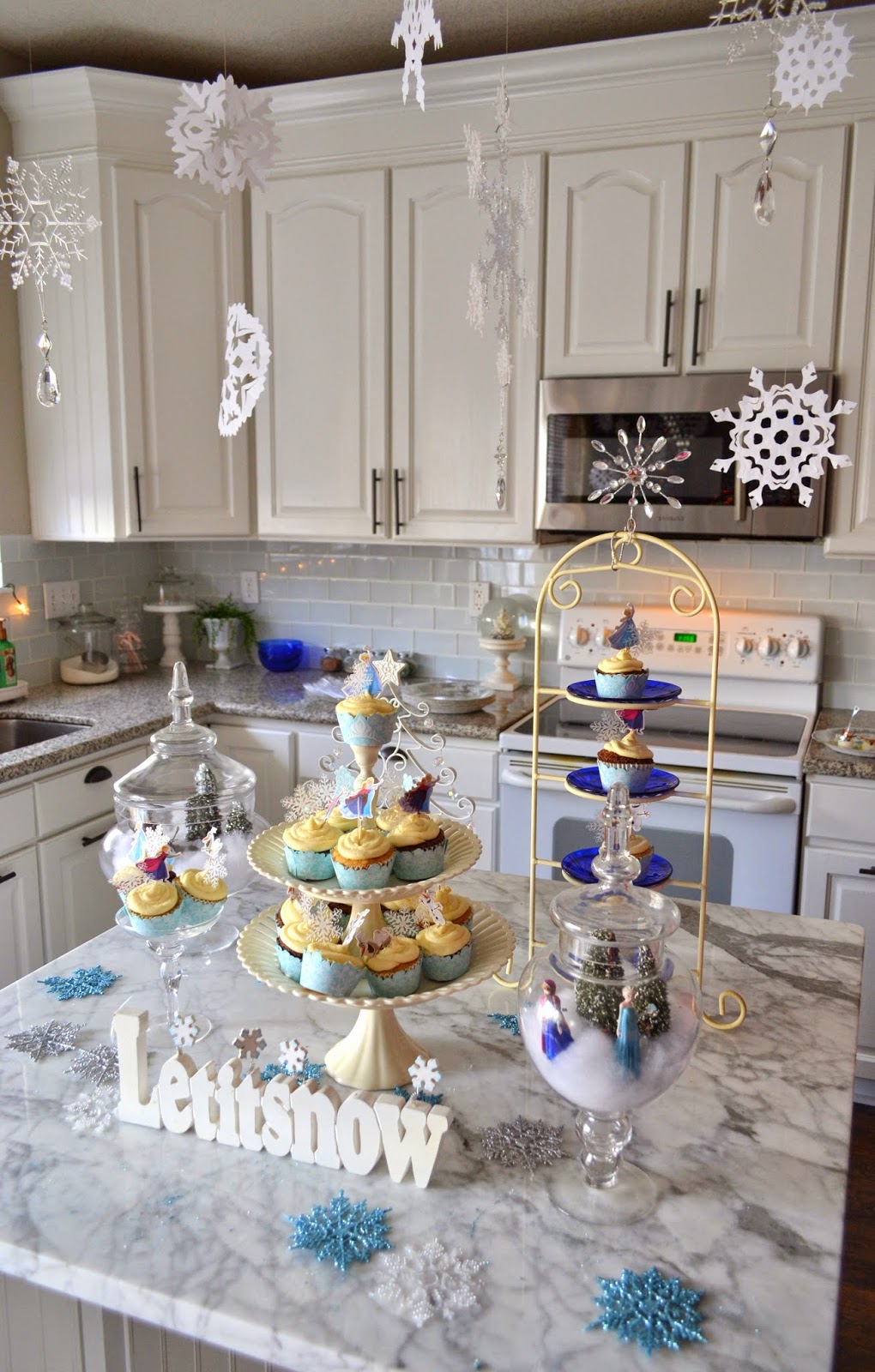 One of the games the girls played was to move as many marshmallows (snowballs) from one bowl to another using chopsticks.  Whoever moved the most snowballs in 3 minutes won the game.  It’s trickier than it looks! 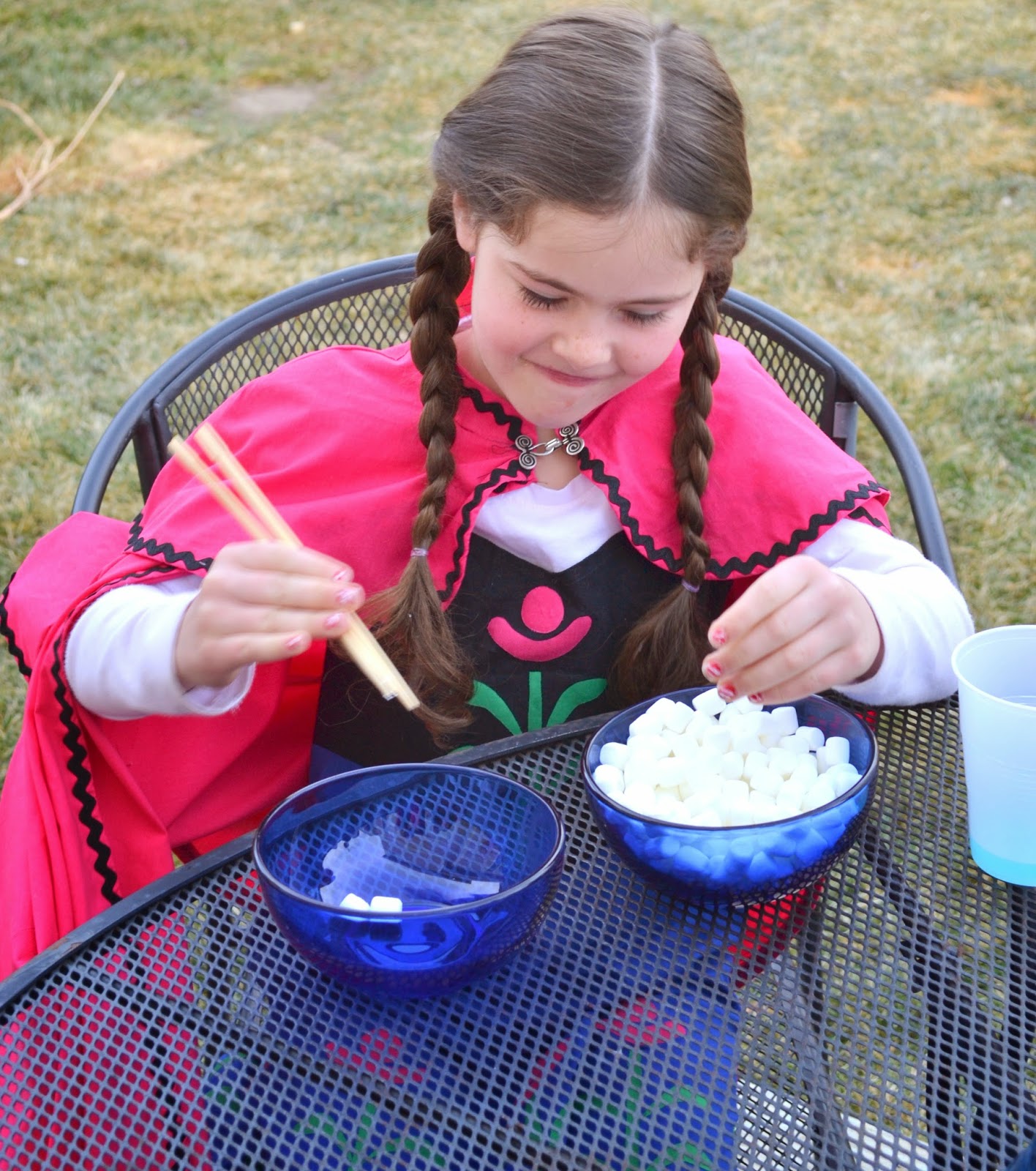 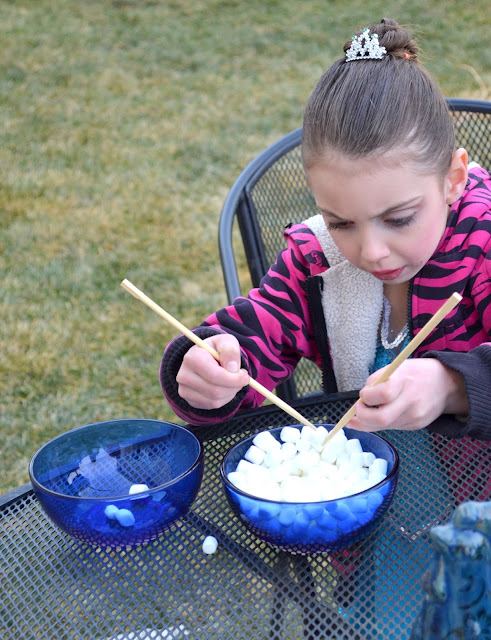 Another game we played was the snowball toss.  It’s a lot like shooting hoops in basketball, except your’e tossing marshmallows into a bowl…in an Elsa costume. 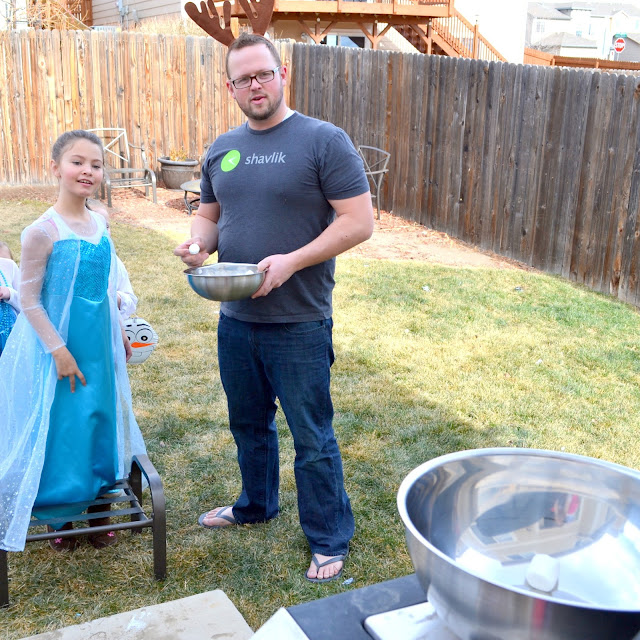 The costumes, treats, and games were fun, but I think my favorite part of the whole day was when all the princesses stood in front of the TV and sang, “Let It Go!” at the top of their lungs, right along with Elsa.  It was a moment that could have melted even the most frozen of hearts. 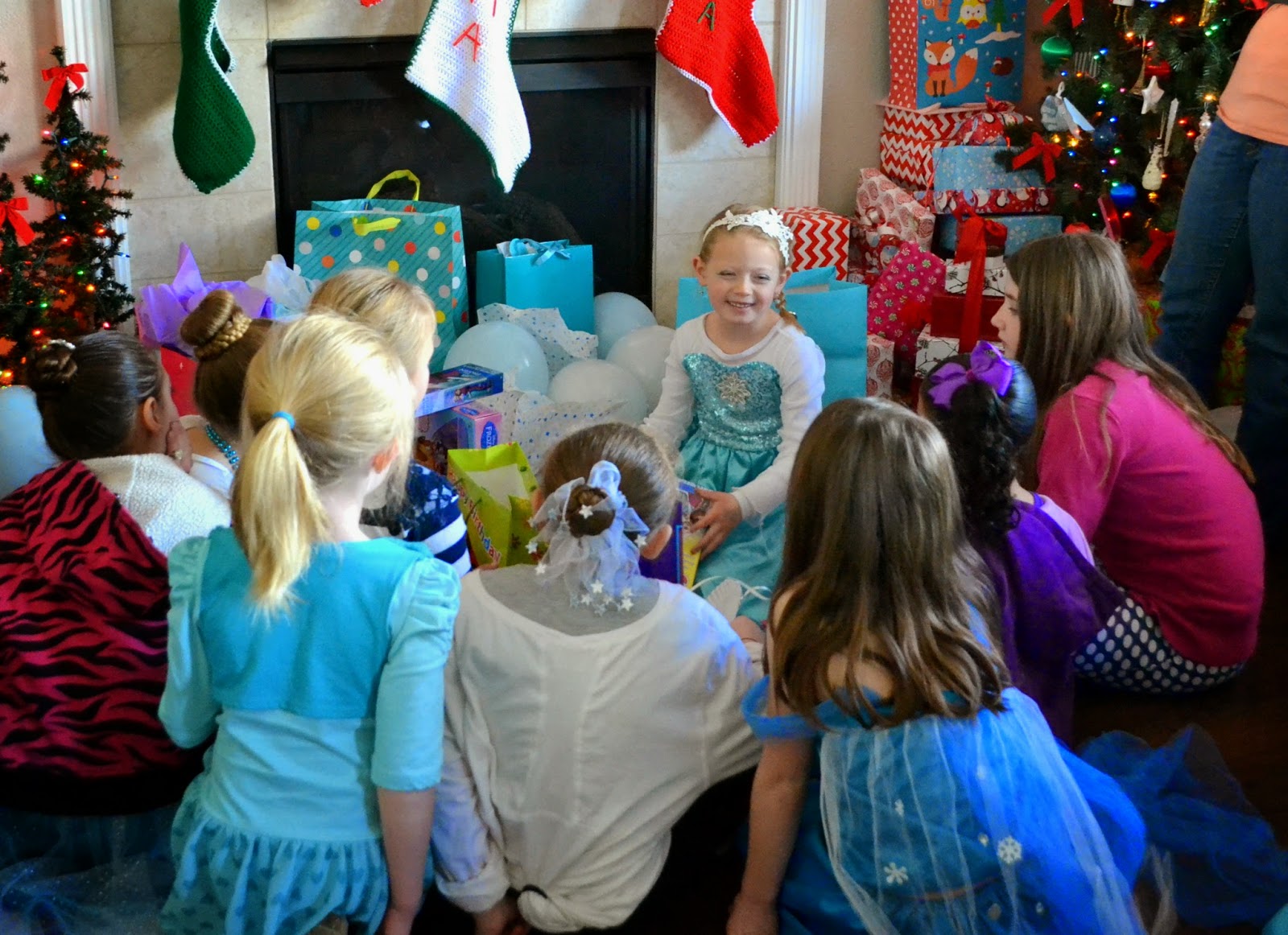