Tara and John Carson were recently on vacation in Portland, Maine when they stopped in to a local diner for breakfast.  They had their 2-year-old daughter with them, and ordered her some pancakes.  The toddler was fussy that morning, and was crying in the restaurant (we’ve all been there!)

The parents said after about 10 minutes of trying to console her, the owner of the diner, Darla Neugebauer slapped her hands down on the counter, pointed at the toddler and screamed at her to “shut the hell up” and continued yelling and pointing while screaming that “this needed to stop”.  The child was so shocked, she stopped.

The mother posted about their experience on Marcy’s Diner’s Facebook page accusing the owner of being a lunatic. Neugebauer responded by saying “you are lucky I didn’t get really *blank* nuts because being physical is not something I cower from.” 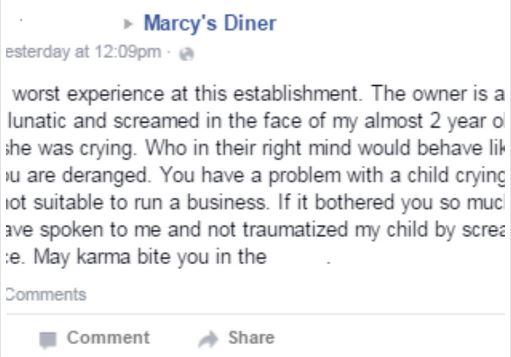 Marcy’s Diner’s Facebook page has been a buzz ever since with comments for and against the owner’s behavior.

What do you think of this owner’s behavior?  As a business owner, did she have the right to yell at a toddler who was fussy in her restaurant? Should the parents have left before it escalated?