My dad is a retired Lieutenant Colonel in the Air force.  As part of his training, he learned to fly airplanes.  I can imagine this is a stressful undertaking- at least it would be for me.  One of the pieces of advice his flight instructor gave him to stave off anxiety was to, “Wiggle your toes and relax.”

The instructor was simply encouraging my dad to focus on something within his power, while the surge of adrenaline ran its natural course.

I have so many memories of my dad reminding me to do just that.  Those nights before a college exam, when my shoulders were bound, and my jaw was clenched, I could hear his voice- “Relax, Janet.  Just wiggle your toes.”   By offering this council, never once did he suggest that I avoid whatever it was that was stressing me out.  Life isn’t about averting and bypassing every scenario that poses a threat.  How boring would that be?

My dad’s flight instructor understood that once the plane was in the air, the pilot didn’t have the option to succumb to his anxiety.  He also grasped the reality that fear is inevitable, and should be viewed as nothing more than a temporary obstacle that can be overcome, more often than not, with practice, training, and perseverance.  Felix Baumgartner became my inspiration for overcoming the body’s natural reaction to scary situations when he jumped out of a capsule over 24 miles high and set the records for the highest manned balloon trip, highest skydive, and fastest skydive.  Fear doesn’t have to be the end all.  If you get scared- take a deep breath, say a prayer, wiggle your toes.  Do it anyway. 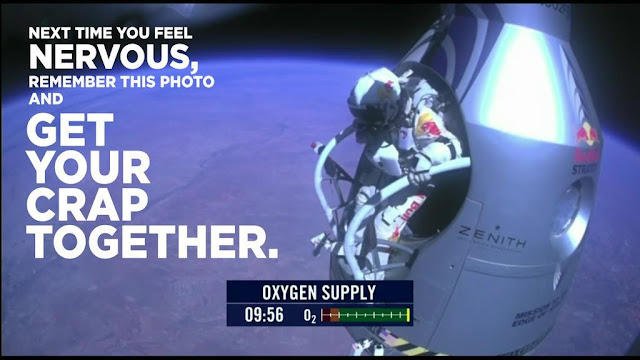