Ok, moms. Let’s get real. Kids pick their noses. Some don’t (although I don’t know what planet those ones live on). But most have and will at some point during their childhood, and for some it becomes a nasty habit that needs intervention.

Because let’s be honest, we don’t want our kids to become that guy at the red light digging for gold while someone secretly takes a picture and posts it on Instagram… 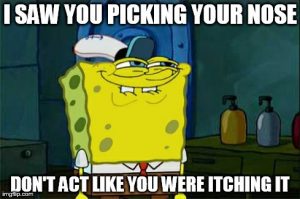 So first, let’s tackle why kids pick their nose.  Well, its natural and normal behavior. Kids are all about exploring their bodies, and sticking their fingers into holes, and when they get a physical reward like *cough* …a booger, it just motivates them to continue the habit! Some children produce more mucus than others due to allergies, or just because they’re lucky… so it’s natural for their fingers to wander to their nose because it’s uncomfortable for them.  If allergies are the issue, maybe medication can relieve some of the symptoms. If it’s not allergies, here are some handy dandy tips to help tackle the nose picking habit.

This works best with younger kids. Just make sure they always have something in their hands. A toy, a book, a snack…anything they can hold onto that will keep them from putting their fingers in their nose.

As your child gets older, make sure they understand that they should use a tissue when dealing with nose mucus. Always have tissues available (in your car, purse, and around the home) so that when you see your child picking their nose, you can quickly hand them a tissue and explain, we use this not our fingers. Also teach them how to properly blow their nose…if it starts running out of control,  they are more than likely going to be constanly picking and rubbing at it.

Stick a band aid on it

Typically just wrapping a band aid around their index finger will make their finger too large to comfortably fit inside their nostril.

Long nails just enable the situation….keeping nails neatly trimmed will make it harder to “dig” around in their nose.

Use a secret word or symbol

Some children honestly aren’t aware of their nose picking habit, even after you’ve brought it to their attention several times. Instead of embarrassing your child when you see them do it, simply choose a word to say that means “please stop”….keep it light and silly like “Bazooka!” or “Pikachu”. When you say it, it will remind them to stop what they’re doing, and also teaches them self awareness.

Following these tips and regularly enforcing proper hygiene and good manners will more than likely be enough to keep nose picking at bay! Good luck mamas, it’s a crazy world out there!!